The Child and the Birth of the New Man is performed during the presentation day for new Swedish music organized by the Society of Swedish Composers. In the video is also an interview (in Swedish) with the composer.

Recording from the concert when Grammy nominated violinist Peter Sheppard Skaerved premieres Riebe's Coffee by the Plague Pit, in London in 2019.

Video from the performance at the Andrey Petrov Composition Competition in the St Petersburg Grand Philharmonic Hall where Riebe won third prize. The video is made by the russian filmmaker Leonid Toropov.

David Riebe in the Society of Swedish Composers»

Biography and information about Riebe on the website of FST, the Society of Swedish Composers (Föreningen Svenska Tonsättare).

Since 2016, Riebe is the producer of Lund Contemporary, a festival for contemporary classical music organized by Lund University in collaboration with several regional music institutions.

Link to the program folder as PDF, on the website of the Malmö Academy of Music. Music by Riebe was performed on November 14, 20 and 22.

Link to the season brochure as PDF. Music by Riebe was performed on October 4, 2015.

London-based violinist Peter Sheppard Skaerved writes on his website about the ongoing collaboration with Riebe (in 2014).

David Riebe is mentioned in the annual report of the International Bureau of Swedish Composers (STIM), as one of the Swedish composers with most pieces premiered during 2013.

The first violinist of the London-based Kreutzer Quartet publish live recordings of Riebe's string quartet "Paradoxes" and the solo piece "A Cat, a Warrior, and a Tortoise" on his website. 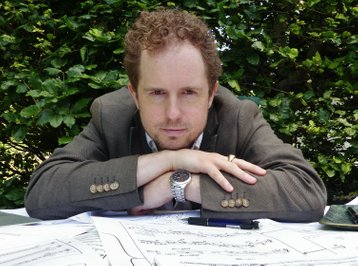 Since 2015, Riebe is a member of FST, Föreningen Svenska Tonsättare (The Society of Swedish Composers). 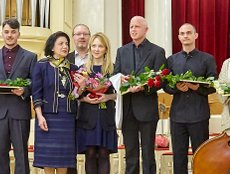 On September 20, 2016, Riebe won Third Prize at the Andrey Petrov Composition Competition (picture) in Saint Petersburg, Russia, with the orchestral piece Magma from 2015. The six selected finalist compositions were performed by St. Petersburg State Symphony Orchestra with conductor Arkady Steinlucht during a concert in St. Petersburg Grand Philharmonic Hall. A video recording made by Leonid Toropov is available on Youtube. 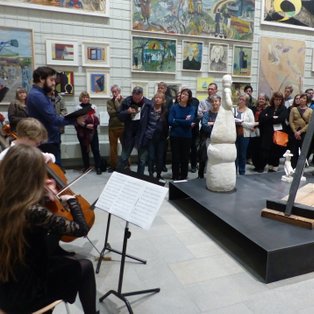 Since 2016, Riebe is Artistic Director and Producer of Lund Contemporary, a festival for contemporary music in Lund, with Lund University as main organizer. The festival has taken place three times: in 2017, 2019 and 2021. A new edition is planned for February 2023. Read more on the Lund Contemporary homepage.

Riebe’s piece The Child and the Birth of the New Man was performed by Västerås Sinfonietta with conductor B. Tommy Andersson at the Presentation Day for New Swedish Orchestral Music organized by the Society of Swedish Composers in January 2022. Here you can watch a video from the performance, with an interview (in Swedish) with the composer.

Music by Riebe has previously been performed at the 2017 Presentation Day. 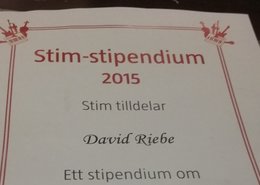 Riebe has received the working grant of the Swedish Arts Grants Committee in 2020 and 2016, the STIM Grant (STIM-stipendium) and the composition scholarship of the Annik and Lars Leander foundation in 2015, the local scholarship of the Royal Swedish Academy of Music in 2014 and the Culture Grant of the city of Lund in 2012.

Riebe is currently working on a composition for Stockholm Saxophone Quartet, who received funds from the Swedish Art Council (Kulturrådet) for the commission. The work will have its world premiere on November 4, 2022, at Fyren in Härnösand.

Riebe is also composing a piano concerto for his long-time collaboration partner, pianist Fredrik Schützer. The concerto is partly financed by the Grand Piano Grant (Stora Pianostipendiet) of the Malmö Academy of Music.

He has also received commissions from Odeum Music Center at Lund University, Lunds stadsorkester and Lund University Academic Orchestra (Akademiska kapellet), and he had a long collaboration with the Nordic Youth Orchestra which premiered his music in 2008, 2009, 2010 and 2011.

In 2010, the Lund University Academic Orchestra performed Riebe's Tuba Concerto in the United States as part of the orchestra's tour there. This included a concert at the John F. Kennedy Center for the Performing Arts in Washington D.C.